Home
Cooking
When To Wrap Brisket When Smoking

Do you know when to wrap brisket when smoking? Read our guide to find out.

The delectable deliciousness of those deep, smoky flavors is at their very best on a brisket. Getting a brisket smoked perfectly is quite a difficult thing to master, with the line between juicy and jerky being foil-thin.

Don’t worry though, it’s normal for it to take a whole to master smoked brisket, even seasoned professional smokers struggle with it sometimes. This is because brisket is such a hefty piece of meat.

There are definitely some things you can do to help the process along, though – one of these being wrapping your brisket!

No, you’re not experiencing deja vu! The good news and bad news is exactly the same thing. This is because whilst it is extremely helpful to have so many different methods of wrapping, it can all get pretty confusing, especially if you’re a first-timer.

So there’s the good news and the bad news – now for the wonderful news. We have compiled all the recommendations on when to wrap brisket and popped them all into this one article.

Keep on reading and you will be well on your way to a succulent smoked brisket.

Recommendations on When to Wrap Brisket

Wrapping Your Brisket Based on the Temperature

One thing most sources can more or less agree on is that brisket should be wrapped when it has reached a particular temperature in the smoking process. This temperature varies slightly depending on the source, but it always falls somewhere in the region between 150℉ and 170℉.

It is worth noting here that this recommendation is referring to the internal temperature of the meat, which should be measured with a meat thermometer.

We highly recommend that you get yourself one of these handy meat thermometers as it will be the best, most accurate way of letting you know the temperature of your brisket or any other meat you cook and smoke for that matter!

Choosing to wrap it when it reaches this temperature sweet spot will help to ensure that the brisket doesn’t dry out, or become a soggy mess. Too soon and you won’t get that crunchy crust that is so desired. Too late and the whole thing will turn into a lump of crunchy crust.

This also has something to do with the fact that between the temperatures of 150-170℉, the brisket starts to plateau. This is where it struggles to reach a higher temperature due to the evaporation cooling it down.

Wrapping it before this will ensure it doesn’t stall. A stalled brisket could take between 4 to 6 hours to start rising in temperature again, and who wants to wait that long for brisket yumminess?!

Another method that lets you know when to wrap your beautiful brisket is by looking at the outer layer. As delicious as it looks, the meat can also tell you some important things about your cooking process. The outer layer is also known as the crust or bark.

You should look out for when your crust starts to reach a delectable deep brownish-red color or maybe even completely black. The color will of course depend on a lot of things.

For example, it may depend on the overall temperature of the smoker or even what wood you use in the first place. What we do know is that the perfect color to begin your wrapping will be anything between a deep red-brown crust to slightly black bark. When you spot these colors, you know it is now time to wrap it.

Wrapping it before it has reached one of these colors could make the brisket too soggy, whereas if you leave it too long to go completely black it could be too dry.

Related to the outer appearance, we have the actual feel of the brisket. You want the bark to be set before you wrap it, and the way you test this is by pulling on a tiny bit of the bark.

If it comes away easily, it is not set yet. If it stays put, then go ahead, it’s all set and ready for wrapping.

Maybe you’re a number orientated kinda chef, and you like specificity. The time method may be better suited to you if that’s the case. This method is heavily dependent on the size of the brisket you are working with.

Typically the smaller the piece of brisket, the shorter the smoking time. In contrast, the bigger the piece, the longer it should be in. This will have a direct effect on the ideal wrapping time.

Bear in mind that once you have wrapped the brisket, whatever the size, the cooking time will be accelerated, meaning your brisket will be ready far faster than if you hadn’t wrapped it. We think this is a good thing because anything that gets us that delicious brisket can’t be bad, right?

These times are just a guideline, however, and will be heavily dependent on the personal preferences of yourself and the people you are cooking for. Some people will prefer their brisket to be a little on the softer, more succulent side. However, other people prefer something with more of a crunchy crust to it.

In these instances, the wrapping time will change. Those who like their brisket slightly softer and juicier should wrap it earlier in the process. Whereas those who want a thicker bark with more of a crunch to it should wrap it after a much longer time, perhaps even waiting until after it has finished its stall.

Another indicator that it is time for your brisket to be wrapped is if it starts to give off too much smoke. Too much smoke can ruin the taste of the meat.

In fact, once the meat has reached an internal temperature of around 145℉, the smoke won’t change the flavor anymore, rather it will just change to a taste that can only be described as lighter fluid. Imagine how heartbreaking that would be to spend all this time smoking your brisket only for it to taste horrible.

Wrapping it once it starts to give off too much smoke will ensure a beautiful smoky taste whilst still ensuring the meat is cooked to perfection.

So why do I need to wrap my brisket?

Hopefully, this article has so far made you super confident regarding when to wrap your brisket, but you may be wondering why you even need to do it. 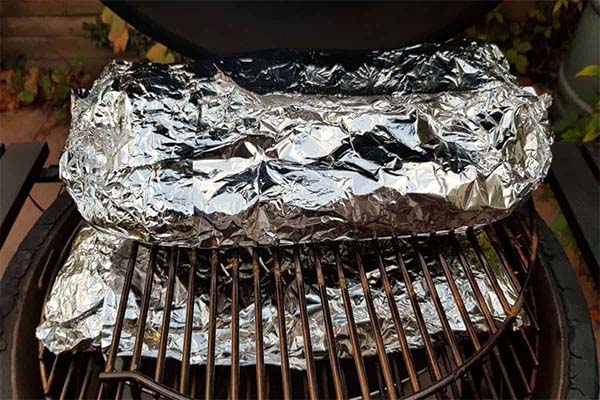 As with the methods listed above on when to wrap the brisket, the decision whether to do it in the first place is a personal one.

Of course, it is something we recommend to get the absolute most out of your brisket in terms of flavor, mouthfeel, and sensuously smoky scent.

To leave a brisket unwrapped risks it becoming a shriveled up and dried out piece of beef jerky. If we wanted beef jerky why would we go through the painstaking but rewarding process of smoking a brisket, right?! We’d just go to the store.

This dryness lies in the fact that a brisket that has not been wrapped takes far longer to cook. The longer you leave it in there, the tougher the meat will become, resulting in a texture of brisket that is too chewy, has less flavor, and is much drier.

Wrapping meat also helps the brisket to get through the stalling period which is when the internal temperature starts to plateau. The foil, or whatever material you use to wrap it will stop it from cooling via evaporation during its plateau.

Without the foil, it can sometimes take up to 6 hours before the brisket starts to gain heat again.

So there we have it. An in-depth informational article detailing when to wrap brisket.

As we have explored, there are several factors to consider when it comes to finding the ideal time for you to wrap your brisket, and much of that depends on the preferences of yourself and the people you are cooking for.

Remember to keep in mind the internal temperature of the meat, the color of the bark, the feel of the bark, the time it has been cooking, and lastly the amount of smoke the meat is producing.

Clearly, wrapping our briskets is the way to go given the innumerous benefits it has – smoky, delectable deliciousness instead of tough, dry, or soggy disappointments.

Whichever of the wonderful wrapping methods listed above you choose, you can rest assured that you will have a piece of mouthwatering marvelous meat that will keep your guests coming back for more and leave you the King or Queen of the BBQ!